The following day (Monday) when I got home from school, there was a message on our answering machine. The caller identified himself, said he got my number from our pastor, and he might be able to help me. He asked me to call him back. I will call this man Mr. G.

I dialed Mr. G’s number and introduced myself.

A very jovial and friendly voice asked me what was wrong with my car. I explained to the best of my knowledge. When I finished, this was his response: “Tell you what Esther, I am going to repair your car, and I will not charge you.”

I immediately burst into tears, and gushed out my thanks amidst sobs. Not only was he going to repair my car, he was also going to give me a car to use while he repaired mine.

After that, things happened so fast. Mr. G directed me where to drop my car. Since it was shaking so much as I drove it, I could not take it his garage. Instead, we agreed that I would drive it to a nearby mall where one of his mechanics would collect it. Immediately I got off the phone, I made the short drive to the mall and waited. After about 30 minutes or so, I saw a red trailer pull up. I got out of my car and introduced myself. The mech offloaded the temporary car he had brought me and loaded mine and left. So suddenly, I had a means to get around! I remember driving to church for Wednesday service and going back to school with ease. I was excited at what God had done for me.

I waited for Mr. G’s call to let me know when to pick my car. After a week, the call had not come. So I called him. The same jovial friendly voice picked.

“Esther, your car is so damaged, I have decided to give you another car,” he said, matter-of-factly.

I was later to find out that Mr. G had donated cars to widows, single moms and so on.

I could not believe my ears. I felt like I was dreaming. He explained to me where to drop off the car I was driving since that was used by clients when their cars were being repaired and pick up mine. When we got off the phone, I was both laughing and crying in wonder.

Long story short, I followed the directions to one of his car shops and collected my car. What surprised me was that this mysterious angel was not at the shop. The people I found there explained he was at another shop. I later found out not only was he a generous giver, but God had blessed him with multiple repair and auto shops in Green Bay.

Within two weeks, God had replaced my beat up dead car and given me a good, reliable car that took me to the end of my campus life. The car served me very well and was a constant reminder that God knew me by name when I had reached my complete end. 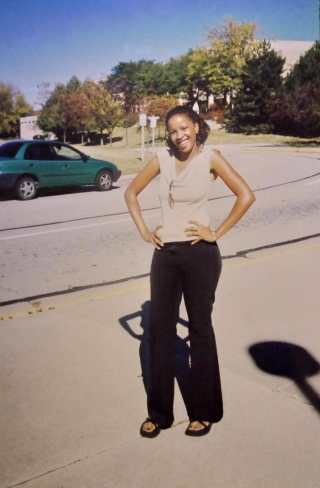 In my third year of college. Miracle car in the background.

In case you are wondering, I did finally meet Mr. G and his family in church. They were really eager to learn about Kenya and my family. When my parents came to visit, I took my parents to visit them. My Dad wanted to speak a blessing over him and his family, which he did. When I was coming back to the country, of course I dared not sell what had been a gift. I gave it to someone else who needed it, just like I once did.

May this story encourage you that God knows you by name. He knows what you need and exactly where you are. May He connect you to your destiny helpers.

Your Father already knows what you need before you ask him – Matthew 6:8